Samsung at CES 2019 is showcasing its latest television technology, a tradition for the company from past CES trade shows. TV technology at CES 2019. One of the more interesting takeaways this time is Samsung’s updated MicroLED modular panel that is now showcased in smaller and larger sizes. The latter part is quite impressive since last year’s ‘The Wall’ TV was massive at 146-inches. This year, Samsung has created a 219-inch The Wall display. Moreover, Samsung’s new panels will now take commands from Google Assistant and Amazon Alexa if you already have a supporting smart speaker. 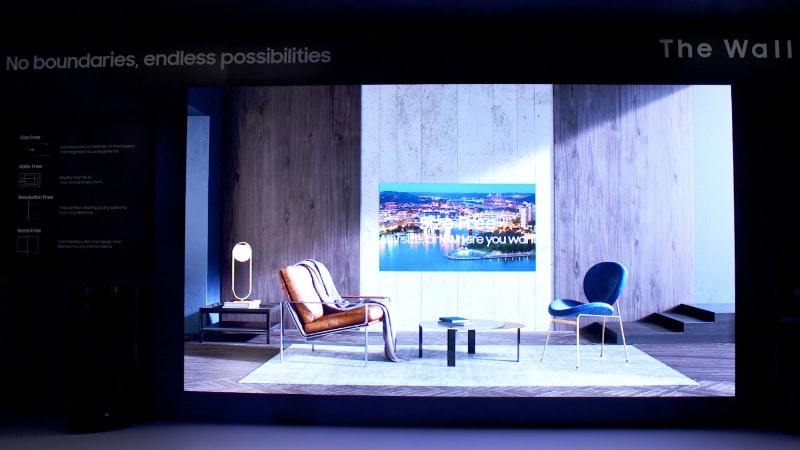 The new 219-inch wall is Samsung’s showcase of the possibilities in resolution and sizes it can achieve with its MicroLED tech. The company also showcased a smaller MicroLED panel at 75 inches, which would be a more practical and affordable setup for most homes. The 75-inch panel supports 4K resolution, but no pricing details have been revealed by Samsung yet. As we mentioned earlier the tech was first showcased at last year’s CES.

That’s not it. After making the surprise announcement of partnering with Apple to offer iTunes movies and television shows on via a smart TV app, the company has also announced support for Google Assistant and Amazon’s Alexa for voice inputs. There is however a catch – users will reportedly need to own a supporting smart device that’s capable of taking voice inputs, like a Google Home or an Amazon Echo speaker.

With this, users will be able to operate the TV’s basic functions like switching it on or off, changing the channel, volume level and also inputs, all through voice commands. Of course, if you don’t have a smart speaker, then the TVs already comes with the Bixby assistant built-in.

Samsung’s competitors Sony and LG already offer support for both voice assistants on their select panels, but that combined with Apple’s iTunes content does make Samsung’s offering unique.

You Have Been Tracked: Facebook is tracking you, even if you...

Amazon becomes most valuable US company for first time But its...